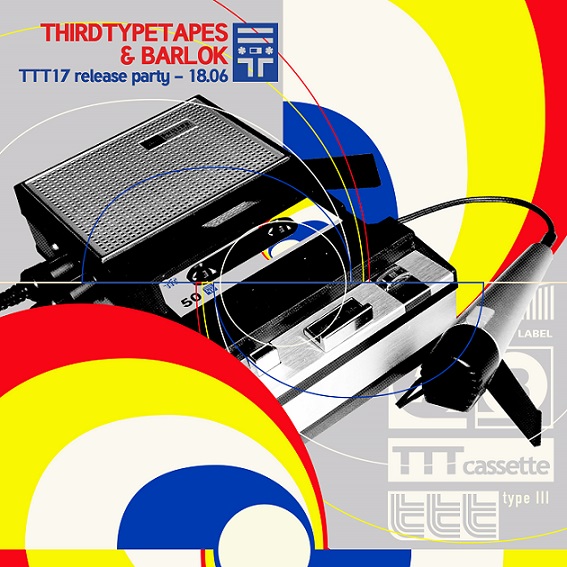 For the occasion of ThirdTypeTapes's 17 th release TTT17 Schädelfrost by GrindMaster Flesh,
a sonic sequence has been arranged in order to teleport you through another temporal travel with artists from Czech Republic, Canada ,China, France, Germany and some of the most forward thinking musicians from Brussel's local noise and club scene. Don't ask what genre is it.
Come listen and find out yourself which planet you truly belong to.


Ankti aka Mozarfucker, Ataraxi,
A self taught mucisian, it’s with the saxophone that Ankti first started to share his music and express himself. His teen years were spent at the centre of an experimental rock-metal band in which provided guitar and vocals. At the age of 23 he began to DJ in the woods and fields of France.
He set up his own label CONTROVERSE. REC in 2005 on which he produced his first tracks, originally composed on a computer the year before. Ankti was also promoter and sound technician at electronic music parties and other projects with the organisation MALDITA, he today carries on his activities in Brussels, Belgium.
- See more at: http://www.structuraldamage.co.uk/new-artist-mozarfucker/#sthash.UPhXSbwq.dpuf
https://controverserecords.bandcamp.com/album/controverse-004-all-together-free-united-by-ankti

Cellule 34
Minimal drum machine, surf guitar and filthy synths… Cellule 34 is the solo project of a sound engineer involved in several compilations (Spielzeug Muzak, Peace and Noise, Serendip Lab…).
As a musician, he has collaborated with some of no-new-wave-indus scene (Froe Char, Deep and deeper, Jeunesse fantôme…).
https://spielzeugmuzak.bandcamp.com/album/cellule-34

Chris Muffin
Dj set from lead member of C:Codes and Club Terror,
"Muffin on Acid", will dig out old Acid classics vinyls and weird, dirty, forgotten tracks from the grave.

Fred Alstadt
Renowned for his brilliant work as a mastering engineer (Ångström Mastering - Brussels), Frederic Alstadt also happens to create sonic journeys that guide us through feedback extremities,
analog synthwaves and field recordings.
His utter love for sound and his fierce yet refined taste for pushing physical boundaries through it make each of his concerts a new experience.
http://www.angstrom-mastering.com/

Holzkopf
Holzkopf is a Coast Salish Territories (Vancouver, BC, Canada) based musician and artist.
His music combines dub mixing techniques with extreme noise performance and psychedelic walls of sound with harsh static rhythms. The use of cassette decks features heavily in his work, using home-made collage tapes as well as found ones. Smashed and grabbed cuts from warbled and detuned tape are juggled with blown out beats and lo-fi sampling.
Performances are filled with volatile energy and unpredictability, never the same twice and constantly evolving.
Holzkopf has been actively performing in North America since 2001 and Europe since 2006. Concerts have ranged from Estonian industrial festivals to jazz and new media festivals to squat shows and parties on farms and under bridges.
His work is adaptive and based on improvisation, proving itself in any situation and expanding itself based on new contexts.
He has supported a diverse range of artists from free-jazz drummer William Hooker and DJ Olive to Venetian Snares, Cex, John Oswald, Scanner and noise artists Knurl, Emil Beaulieau and many others.
Holzkopf has produced dozens of small run CDs, tapes and records as well as many online releases.
His work has been released by labels such as Wintage Records & Tapes, Panospria, Eschaton Industries and Dainty Deathy in Canada, Attenuation Circuit and Toztizok Zoundz in Europe and No Disco in Japan.
https://soundcloud.com/holzkopf666

Icon Template
Icon template falls in raw industrialized hypnotism, and rise into endless techno rhythms. It expresses a rebellion against order by instilling chaos and feed the conscious perceptions of its dark sides.
" Our consciousness shines the way into darkness "
https://soundcloud.com/icon-template

Line Vangrunderbeeck
Line Vangrunderbeeck is an autodidact artist from Brussels. Her homemade cut and paste works have over the years grown into sui generis, subtly surrealist, feminine and friendly yet otherworldly works of art.
Ingenious repetition, mirroring, displacement and de-contextualisation shape those worlds. Either in black and white or in soft pastels contrasted with brights yellows and reds,
Line seems to instinctively choose the right palette to highlight the visual appeal of her works.
Her passion for music and her involvement in the "Belgian musical underground" have led to making album or cassette covers (ao. Hellvete), posters and flyers for the Kraak label.
TTT is proudly honored to have her as our guest for an experimental dj set guaranteed to freeze you to the bones.
http://www.dawnouterland.be/

Poprve a za Penize and Romano Krzych
"Both activists of the deviant and no- music scene of Prague (as bookers, players and sometimes writters) , Poprvé a za peníze and Romano Krzych lead for five years a duet called I R which was conceived at first ironically against the idea of "project" : no ambition, no music, no style.Still possibly violent and physical, they dig for a while a slower and more introspectiv matter"
http://rkz1.blogspot.cz/
https://soundcloud.com/romano-krzych
https://romanokrzych.bandcamp.com/
https://poprvazapenze.bandcamp.com/

William Nurdin
William Nurdin, active pluri instrumentist, born in 1980. Sonically active for over 17 years.
WN, trained as a guitarist and eager of instrumental knowledge, has been studying music since 1993.
Field recordist since the acquisition in 1996 of a MiniDisc recorder.
Numerous experiences as a singer in various musical formations.
For the past few years, WN is "flowing, fluid" interdisciplinary carefully random orchestrated human,
like a spontaneous indeterminacy aktionist with a zest of "video plasticien".
http://nwwn.tk/
http://rohsprod.tk/