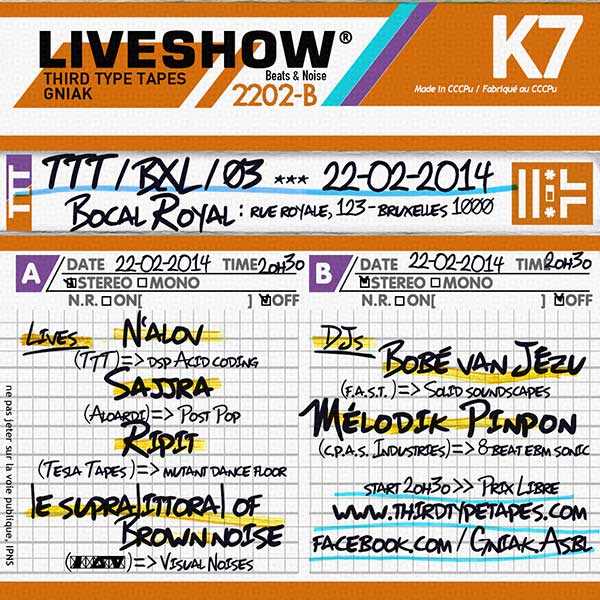 N'alov,
N'alov is the result of two psychotic species raised in the western seasides of Britanny.
Bernard Brute, a performer & wine maker is not only here to seduce the audience , but also to shock violently with his alien attitude and psychotic manners to express his free artform. "which is somewhere between poetry,singing, exhibiting, jogging, yelling, strectching,hulahooping and hardcore powerfitness".. Finisterre (aka Yogi Data) provides a hectic nuclearized sonic environment with custom hardware and acid-coded software for B.B. to enter a freaky post-exotic trance. Normal people will just think it's totally nonsense, ok then.

Sajjra
Chrs Galarreta (Peru). Very active in the South American experimental scene since 1995. The sublime and the uncertainty are present in his actions, he gets them using broken electrical appliances, homemade audiovisual instruments, field streamings, field recordings, feedback systems, the induction of errors in the software-hardware and in the way to play musical instruments. He transduce imperceptible physical phenomena for humans to an audible dimension (as electromagnetic fields or sub-acuatic sounds). He is mostly interested in the exploration of the aforementioned interfaces and auto-regulated systems to apply them to create inmersive experiences, experimental songs and des-compositions, hacking the human perception of space-time as a form of civil disobedience and social auto-reorganization. He comes from an autodidact formation, today he lives between France and Netherlands and continues developing his independent projects and researches in “Stichting Centrum” at Den Haag. His work has taken him to make concerts, installations, performances, lectures and workshops in Latin America and Europe.
Galarreta was founder member of the independent label and association Aloardi and of bands like Sajjra (current solo experimental-song project), DiosMeHaViolado (soloist project sometimes in collaboration with Claudia Machuca, Fabian Escalante, Yuri Gutierrez and Aldo Castillejos), Evamuss (as soloist), Azucena Kantrix (with Wilder Gonzales), Tica (with Fabiola Vasquez), Garrapata (with Gabriel Castillo and Rolando Apolo), Ninguna Ninfula (with Sabrina Melenotte), Miasma (with Sergio Sanchez), 50 Otages (with Mathiu Finisterre, Bernard Bruit and Julien Otavi) among others.

Ripit
Ripit, a.k.a Nyko Esterle, started his musical activities as a black metal guitar player in 1995. In 1998 he turns into radical electronic, developping a noisy, rythmical and psychedelic sound based on primitive synthesizer use. He evoluates to a more complex form of sound tending to beat micro-surgery and orchestral bombast.
He released over 100 records on numerous label such as Tesla Tapes, Idiosyncratics, Angstrom, Bruit De Fond, Zhark, Yb70, Solis Kanones, Rexistenz... and toured several times in North America and Europe.
In 2006, he founded with TZII (www.tzii.tk), the protean project Solar Skeletons (www.solarskeletons.com).
In 2007, he founded the concrete Dub/Mutant Rap project FUJAKO with portuguese Dub strategist HHY (www.soopa.org).
Back to a more primal creative technique, his live sets are based today on the extensive use of modular synths, ol'time drum machines and no-input mixers to create a dancy, acid music, plunging the crowd in a magma of electrical textures mixing dance-floor references and magnetic fog.