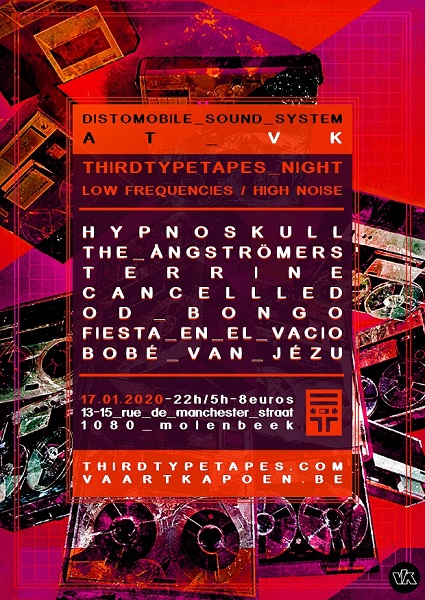 The party at VK is the occasion to celebrate with the Distomobile Sound System the 3 last releases of Third Type Tapes with live acts by Terrine, Cancellled and The Angstromers. To dance all night, more live acts are joining in : Hypnoskull, Fiesta En El Vacio and OD Bongo, introduced by Dj BobeVanJezu.
Cold pumping grooves, dark industrial techno, abstract experimental pulses, eery vocals, heavy dubs, psychedelic distorted beats…
The sound vibrations will travel all night long from one style to another, for the pleasure of ears, chests and feets !!

THE ÅNGSTRÖMERS / Release Party for Path to Danache
The Ångstromers (Frédéric Alstadt & Nico 'Ripit' Esterle) return from their ritualistic collab with Haiti's Chouk Bwa to play with the spirits that continue to haunt the machinic wetware. Bending postindustrial timbres echo'd out on rhythmic pulses that take time to settle in, The Ångstromers offer laser-precision sound design coated with a silver lining of distortion. These modular grooves burn slow.
The party will be the official release for their tape : Path to Danache, as TTT33 !
https://soundcloud.com/angstrom-records/sets/the-angstromers-live-at-magasin-4-brussels/s-1AoKI

TERRINE
The seriously don't care and hedonist Claire Gapenne's solo project. She was performing with the french band Headwar and also right now with her duet Me Donner. Terrine is the field for a freeform improvisation, mixing industrial and electronic experimentations sometimes almost dub techno, with a super restrained but perfectly mastered setup.
She released the TTT31 last november : Live Orléans 2019 !
https://terrine.bandcamp.com/

HYPNOSKULL
Hypnoskull emerged as a project of Patrick Stevens (also former member of Sonar) in 1992, who combines the power of pure analog electronics with harsh rhythm structures to form an anarchic assault of noise and techno-industrial. A true master of the genre !
https://soundcloud.com/hypnoskull

BOBEVANJEZU
Member of Third Type Tapes, formerly of the FAST collective, this music digger will bring an opening dj set to warm up the speakers ! Expect a subtle combination, from new hits of the underworld to hip hop & noise classics.
https://soundcloud.com/bobevanjezu2

Distomobile sound system is an outgrowth of the Third Type Tapes label activities. Still in its infancy, it started its life in 2018 in the label events in Brussels, involving label artists but also more largely friends who share the same love for sound’s physical effects and experiments. Constantly growing and evolving, its purpose is to push deep, loud and clear the music of this community of artists, in Belgium and beyond.

8€ at the door for full night of noise !